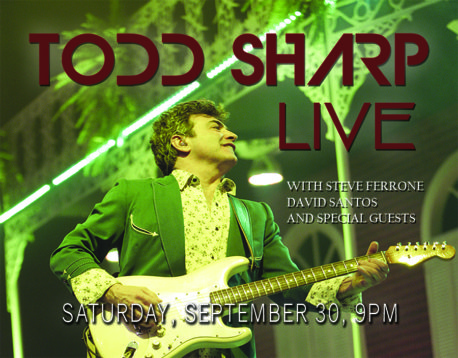 Backed by his critically acclaimed trio: Steve Ferrone (drums) and David Santos (bass) with special guests, Sharp will feature originals from his two solo releases, hits from his songwriting catalog, and blues/rock covers from friends and former band-mates alike.

A Cleveland native, Sharp left home at 19 to join up with Hall & Oates as their lead guitar player. After years of touring and recording with the likes of Rod Stewart, Fleetwood Mac’s Christine McVie, Mick Fleetwood and Bob Welch, Delbert McClinton, Randy Meisner, Carlene Carter, Richard Marx, Aussie icon Jimmy Barnes and French legend Eddy Mitchell, Sharp has truly made a name for himself as a renowned guitarist, writer and recording artist. Sharp currently resides in Nashville performing regularly with his trio as well as founding his own guitar amplifier company; Todd Sharp Amplifiers.

Sharp, a former Angeleno, looks forward to returning to LA for a night at the intimate and legendary Baked Potato with his smoking hot trio and is sure to be joined by a few special guests as well. “We’ll play some of my originals as well as some covers, and of course I’ll have my own amp (Todd Sharp Amps) backing me up.”