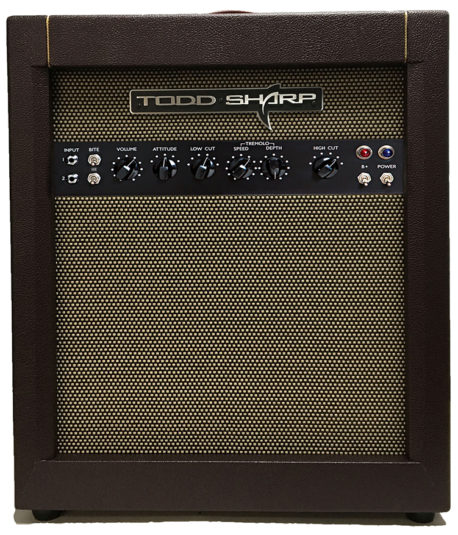 The flagship JOAT (Jack Of All Tone) series amplifiers, available in 20, 30 and 45 watt configurations with Reverb/Tremolo and matched 2×12” cabinets, offer a unique approach to vacuum tube guitar amplification. There is no tone stack (conventional bass, mid, treble controls), nor the loss that comes with a conventional tone stack. “It’s all tone, but you can take some away if you like,” Sharp says. The JOAT circuit employs a unique approach to gain and tone architecture.

The debut combo will feature an EL84 output stage at 20 watts into various speaker options including a custom 12” Alnico. Additional output tube and power options will follow later in the year.

To set up a meeting with Todd Sharp at either show, please contact:

About Todd Sharp Amplifiers:
Amplifier Design by a Real Player for Real Players

“After knowing and playing with Todd Sharp for many years I was anxious to try his new amplifiers. They are everything I hoped for and more. Very versatile and constructed to a very high standard technically. The Jack of All Tone delivers exactly what it says…it’s now front and center as part of my Hall & Oates touring stage rig and I can’t wait to get it into the studio as well.” – John Oates

“I love my JOAT amp by Todd Sharp and all of its cool features. It is extremely versatile, uniquely designed and is simply beautiful.” — Steve Wariner

“Rich musical harmonics in a handcrafted amp that’s made by a guitar player!!! What more could you want?” – Keith Urban